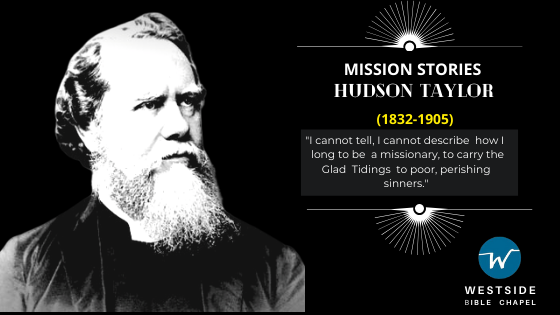 "I cannot tell, I cannot describe how I long to be a missionary, to carry the Glad Tidings to poor, perishing sinners. For this I could give up everything, every idol, however dear. I feel as if I could not live if something is not done for China."

This quote from Hudson Taylor in a letter to his mother shows just how much he was consumed by an intense passion for those who have not heard the gospel.

Hudson was born in England in 1832. His parents, James and Amelia Taylor were devout Methodists, provided their children with a sound homeschool education, and were also thorough in teaching them spiritual matters.

When he was 15 years 0ld, Hudson started working as a junior clerk in a bank. His co-workers were worldly and skeptical toward spiritual things. They ridiculed the young Hudson’s views about God until he started to question his Christian upbringing. Quickly adopting their perspective, he concluded that he could live any way he chose.

But he soon developed an eye infection which forced him to resign and start working for his father. At the point, he was unhappy and troubled in an unending spiritual struggle.

Conversion: The Power of Prayer

Even while working with his father, he failed to notice his son’s spiritual struggle. But his mother was sensitive to his situation and began to pray earnestly for his salvation.

One day, she determined to remain in prayer for Hudson’s conversion until she felt certain that her request had been granted. She had gone to visit her sister miles away from home. As she prayed, Hudson was busy reading a Gospel tract he had found in his father’s store and the light of God flashed into his soul by the power of the Holy Spirit.

He immediately fell on his knees and accepted Jesus as his Savior. At that time, an assurance came to her mother that she no longer needed to continue praying.

Amazingly, his younger sister had also been praying for his conversion for about a month having written in her notebook “I will pray every day for Hudson’s conversion.”

This is very encouraging for those of us who are praying for our loved ones to get saved.

(Join us at our church in Sydney to learn how you can do this, too)

Not long after conversion, Hudson dedicated himself entirely to the Lord's work and soon sensed that God was calling him to China. He also began studying medicine and trusted God for his every provision.

In 1853, at the age of 21 and burdened for the Chinese who had never heard of Christ, Hudson sailed for China as an agent of a newly established mission society. He arrived in Shanghai and immediately began learning Chinese. Funds and support from home hardly ever arrived, but Hudson depended upon God for his every need. While non-nationals were not allowed into China's interior those days, Hudson chose to ignore the restrictions and often travelled to inland China to preach the gospel.

In 1858 he married Marie Dyer who was working at that time in a school for Chinese girls.

Hudson Taylor spent more than 50 years in China as a missionary. He is known for his respect for the Chinese culture. He went so as far as dressing like a Chinese man in his efforts to blend in while sharing the Gospel, a step that saw him accepted by the people he was preaching to.

In China, Hudson worked as a doctor, evangelist, and translator until his return to England for medical reasons. In England, while recovering, Taylor was able to complete his medical studies, revise a Chinese New Testament as well as organize the China Inland Mission.

He later returned to China but the sufferings multiplied. His daughter took ill and died, the family was almost killed in a riot, Maria his first wife died in childbirth, and his second wife died of cancer.

However, China Inland Mission continued its work of reaching out to millions for Christ. By 1895 the Mission had 641 missionaries and 462 Chinese helpers at 260 stations under Hudson’s leadership. Sadly, many missionaries were martyred, and hundreds of Chinese Christians were killed in a Boxer Rebellion of 1900. Nonetheless, the number of missionaries kept increasing in the coming decades.

Hudson influenced hundreds of people to be missionaries by setting an example that is followed to this day.

Are you sharing the Gospel with the people around you as Hudson Taylor did?

Visit our church in Sydney and worship with the welcoming church family of Westside Bible Chapel – Sunday mornings at 11:00 am and learn more about God.

For more information, send us a message on our Facebook page.